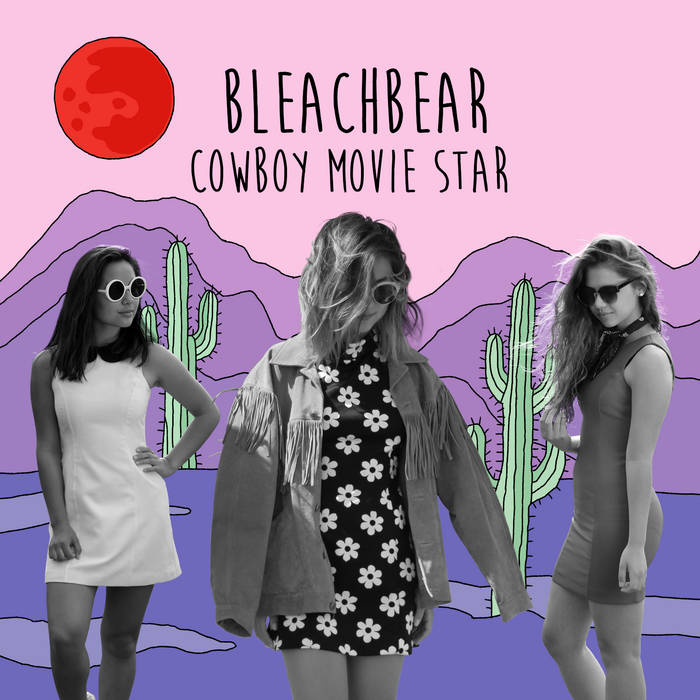 Bleachbear’s sophomore album “Cowboy Movie Star” began summer 2015 when Tigerlily stumbled upon a book of vintage postcards turning them into a collage book intermixed with phrases from cut-apart poems. The finished project is an ode to western deserts, 1950´s slow dances, and old Hollywood. Bleachbear worked with producer Kurt Bloch (The Fastbacks, Young Fresh Fellows) to capture a raw Seattle sound, and the album was released in July 2016.

WHAT PEOPLE ARE SAYING:

"If you asked us to summarize what Seattle sounds like in just one band in its scene, after some careful consideration, we would probably say Bleachbear. Seattle music comes in many shapes and forms, but the music penned by the pop-rock trio does wonders in blending two of the most prevalent styles of music in the Emerald City: guitar-driven ethereal dream pop music, and jangly, pleasant surf rock revivalism...the musical equivalent of a blurry, low-exposure Polaroid picture of one of the best nights of your life." - Northwest Music Scene

“Bleachbear’s new album shines with breezy surf rock inspired melodies and indelible guitar and bass hooks. There is a bright future ahead for these ladies and songs like ‘Boy’ and ‘Sunken Submarine’ are sure to have you singing along this summer!” ​- Jessica Dobson, Deep Sea Diver

“Cowboy Movie Star manages to be both endearing and raw, on the edge of surf and pop. Listening to Cowboy Movie Star is much like following along to a piece of audio cinema; a story you'll want to play back again and again.” - Hollis Wong-Wear, the Flavr Blue

"I’ve heard enough to realize what’s going to blow mind, but once a year something comes out of left field and hits me hard. Cowboy Movie Star is that album, it is just soooo good...What struck me most and most immediately about this album was just how distinctive the sound was... 'The Love Detectives' immediately snaps with a killer guitar riff and encapsulates everything that Bleachbear is in just 30 seconds; the bands sweetness hinting at 50’s doo-wop on the songs “bum, bum” vocals, the slight edge with the guitar distortion, the bands complete conviction, the power and self-assurance in guitarist and lead singer Tigerlily’s vocals, and the total confidence to bend the songs beautiful melodies out of shape. Not that the band needs to convince anyone of their talent, but they do it beautiful here and right from the get go... 'Boy' is without a doubt one of the most complete songs I’ve heard all year, and just like with 'The Love Detectives' they show a confidence in the music they’ve made to not only crank out a surefire hit song but to bend and warp the tone at times, laying on the whammy bar to that smooth and fuzzy exterior." ​- Brian Snider, Secretly Important

All songs by Bleachbear Copyright 2015

Bandcamp Daily  your guide to the world of Bandcamp